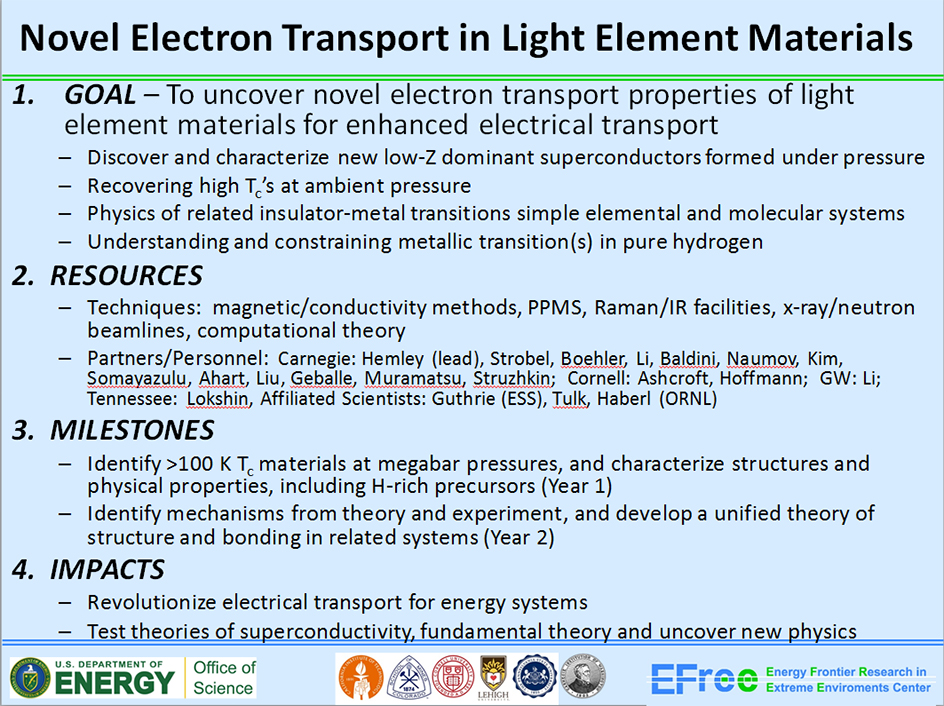 Overview: There is growing experimental evidence for novel electronic properties of dense hydrogen rich materials under pressure. Interest in this phenomena dates back to the seminal prediction of Ashcroft that hydrogen in a very high density monotomic metallic state would be a very high temperature superconductor with a Tc, perhaps, well above room temperature.  Later, calculations have predicted high temperature superconductivity in hydrogen-rich compounds or alloys. Most recently, remarkably high Tc have been predicted specifically in simple hydrides.

The overarching goal of the project is to uncover novel electron transport properties of hydrogen-rich materials for enhanced energy transport. A key component of the project is to discover and characterize new low-Z dominant superconductors formed under pressure. In keeping with the goals of EFree to ultimately produce new classes of energy materials that are useful in energy systems, the project seeks to recover high Tc under ambient pressures. Because high Tcs often occur near insulator-metal transitions, these intriguing electronic phenomena require further understandings of insulator metal transitions, specifically in simple elemental and molecular systems. Finally, the work requires continued understanding and constraining metallic transition(s) in pure hydrogen, both as a model system and as a grand challenge problem with potential applications over the long term. 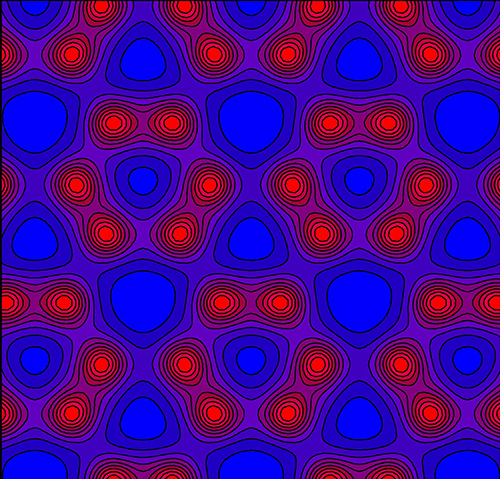 Key milestones for the first year include identifying new materials with Tcs >100 K under pressure, including those recently predicted as well as observed to exhibit this behavior at Tc megabar pressures, and to characterize the crystal structures and other physical properties. The latter includes studies of H-rich precursors.

These studies include fully characterizing the structural properties of the lower pressure precursor phases of materials that ae known or predicted to exhibit high Tc behavior at higher pressure. High-pressure neutron scattering is a critically important tool in this respect because of its singular ability to determine the structure and dynamics of the H (D) sublattice of these materials. Milestones for the second year are to identify mechanisms from theory and experiment, and to develop a unified theory of structure and bonding in related systems. Ultimately, the project seeks to revolutionize electrical transport for energy systems, and in so doing so to provide tests of  theories of superconductivity, as well as fundamental theory more broadly and the possibility of uncovering new physics that could in turn impact modern technology.