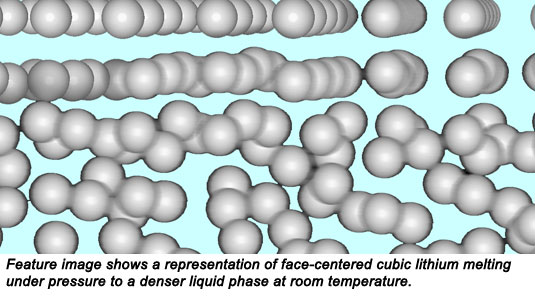 Lithium is the lightest metal in the periodic table, the least dense solid element at room temperature, and has only 3 electrons per atom. Under pressure, lithium behaves in a manner that’s anything but simple. Above modest pressures of around 40 GPa, not only does it melt at room temperature, but then refuses to freeze down to 190 K, some 45 K colder than liquid mercury. When lithium does eventually solidify at lower temperatures still it crystallizes into a range of highly complex structures.
The researchers speculate that, in the case of lithium, the zero-point energy increases with pressure to the point that it is actually sufficient to induce melting. This work supports earlier conjectures of finding a material which never freezes.  The prospect of a metallic liquid at even the lowest temperatures raises the intriguing possibility of novel materials such as a superconducting liquid as predicted previously for hydrogen at very high pressures.
An international team led by scientists from the University of Edinburgh, and including Carnegie scientists Malcolm Guthrie, Stanislav Sinogeikin, and Ho-kwang Mao, believe that this exotic behavior is directly due to the exceptionally low mass of the lithium atom.
This work is supported by a research grant from the UK Engineering and Physical Sciences Research Council and facilities made available by the European Synchrotron Radiation Facility. It is also based on work supported as part of the EFree initiative, funded by the US Department of Energy, Office of Science. HPCAT, where some of the research was conducted, is supported by DOE-BES, DOE-NNSA, and NSF. APS, where some data was collected is supported by DOE-BES [C. Guillaume et al., Nature Phys. 10,1038 (2011].