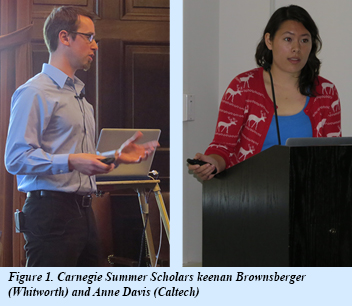 In addition, Anne and Keenan gave presentations on their research at the monthly “Lunch and Learn” event at Carnegie’s P Street Headquarters on Friday, August 14.  Lunch and Learn provides an opportunity for the non-scientific staff at Carnegie’s administration building to share in the excitement of scientific discovery through presentations by the scientists from the various departments within the Institution.

The two students have completed their summer projects and have returned to their home universities for their final year.  Each of the students will be presenting the results of their summer’s research at national meetings during the upcoming academic year.